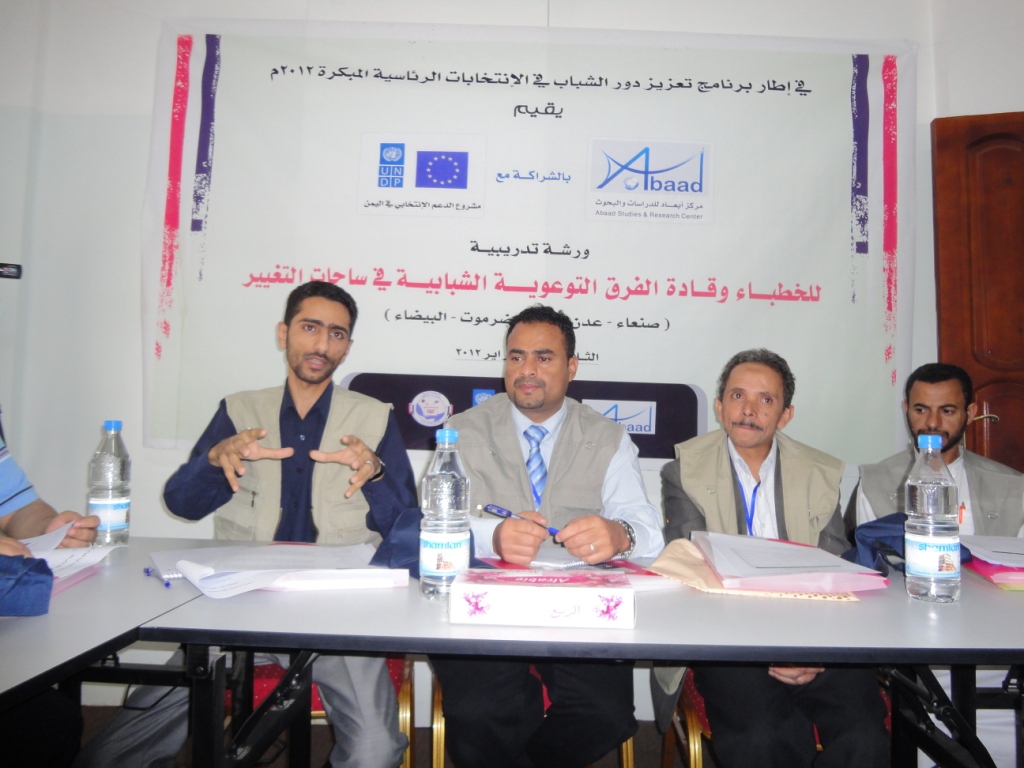 Abaad Centre for Research and Studies in collaboration with the Yemen Election Support Programme (JEAP) held on Wednesday a seminar on “ Presidential elections and its impacts on security, political, economic and social situations, 2012.

Regarding security challenges and presidential elections, Mohammad Saif Ahmed, managing editor of Madarat Magazine stressed in a working paper that Yemenis are at a critical and historical crossroad.

“If all scenarios of early presidential elections are discussed on the base of the development of security , political, possibly revolutionary events, as well as the willingness of the main actors of the states and their intentions, what is certain that the failure of elections would only complicate the Yemeni crisis in the form that would thwart the political transition desired by the people,” he added. “ The results would make the horizons uncertain and choices limited.”

“Holding of the elections in Yemen, despite reconciliation, is not only a tactic forced by necessities of political settlement and its requirements, but also a translational strategy,”

“ Thereby, election is a needed step for several reasons including that it would give the transitional transfer process a decisive constitutional and social feature, and it affirms the priority of rationalizing the transfer and granting it a legislative and legal feature that rehabilitate to the constitutional reference that was subjected to violations in the past periods.”

He further affirmed that dealing with the demands of some revolutionaries’ refusal of the early presidential elections is easier in case it is compared to other challenges that the election process would face.

“Undoubtedly, the elections would be complicated as violence acts are still widespread across the country that witnesses unprecedented insecurity. The elections also face clear opposition by the Islamic hardliners , some members of the Southern Movement and the Houthis who were excluded from the GCC-brokered agreement.”

On a working paper titled (the revolution and Feb. 21 election”, the political analyst, Mohammad Al-Ghabri, said the election day is not only the selection of a new leader from the South, It is similar to a referendum of ending of Saleh’s rule.

“The call for boycotting the elections is such a declaration of allying to Saleh who tries to disturb elections, the vote becomes an important matter for the success of the revolution’s objectives gradually” he cited.

“Actually, the election will help the halt of security and economic deterioration, reconstructing of the military and security services on the base of national standards , drafting of a new constitution , holding of presidential and parliamentary elections, running the country by elected authorities, preparing a ground fit to establish a new state, and finding out solutions for the cases of Houthi and Southern Movement.”

“The GCC initiative and it implementation mechanism is a balanced political solution; while It did not end Saleh’s regime, it did not meet the demands of the revolution” he added. “The achievement of all the revolution’s demands seemed impractical as the regime had the willingness to plunge the state into a civil war” he added.

Chief of the Study and Economic Media Centre, Musafa Nasar, said in a working paper “We can judge Yemen economy via many indicators that evaluate the deterioration of the living standards and increase of the poverty levels as the rate of poor people increased 60 percent compared to 45 percent in the past.

“The reasons behind the economic recession were not the anti-regime protests, but negative accumulations of the government consecutive failure” he added.

“Due to that failure, the private sector was subject to loses amounted 50-60 % and the revenues of tourism declined to zero, many factories were shut down owing to the punitive policies toward the revolution, and the oil derivatives were deliberately disappeared,” he added. “In the end of 2011, it was disclosed that YR 570 bn was the revenues of the oil of derivatives, the amount that would have lead to development, but it was given to pockets of corrupt people.”

“The interim government has opportunities to achieve economic development, reconstruct the service and economic institutions and eliminate sources of corruption” he cited. “After the transition stage, we can put the first step for the economic development through focusing in all governorates including Aden and its strategic port that could absorb a big numbers of unemployed people through establishment of huge tourist projects.”

“The human resources and youth should be exploited and enhance new sectors such as communication and information sectors, and reconsidering legislation in the field of investment, economy until efficient cadre and developed economy is built.

As for the social complications and the realistic reasons of the early presidential elections, the intellectual Mujeeb Al-Homidi said in a working paper that standing of people by the moderate republicans who demanded the revolution and democracy affirmed that the Yemeni society resists any political legitimacy that comes from outside the people.”

“The establishment of the Yemeni unification on the base of democracy, multiparty did not prevent the autocratic structure of the former regimes from controlling the security, military, financial and media institutions, so the democracy turned to a decor that led to a spiral of conflicts including the 1994 and the Saada six wars, domination of the military institution by the ruling family and exploiting all the state’s resources to strengthen the power of President’s family.

Separately, Abaad Centre for Studies and Researches concluded Tuesday in a workshop to the religious clerics, preachers and field teams on enhancing the youth’s role in the early presidential elections.

The seminar reviewed the political, economic, social and security needs of the presidential elections.

The participants were trained on the electoral awareness among the youth camping in change squares in Sana’a, Aden, Ibb, Hadhramout and Baidha.