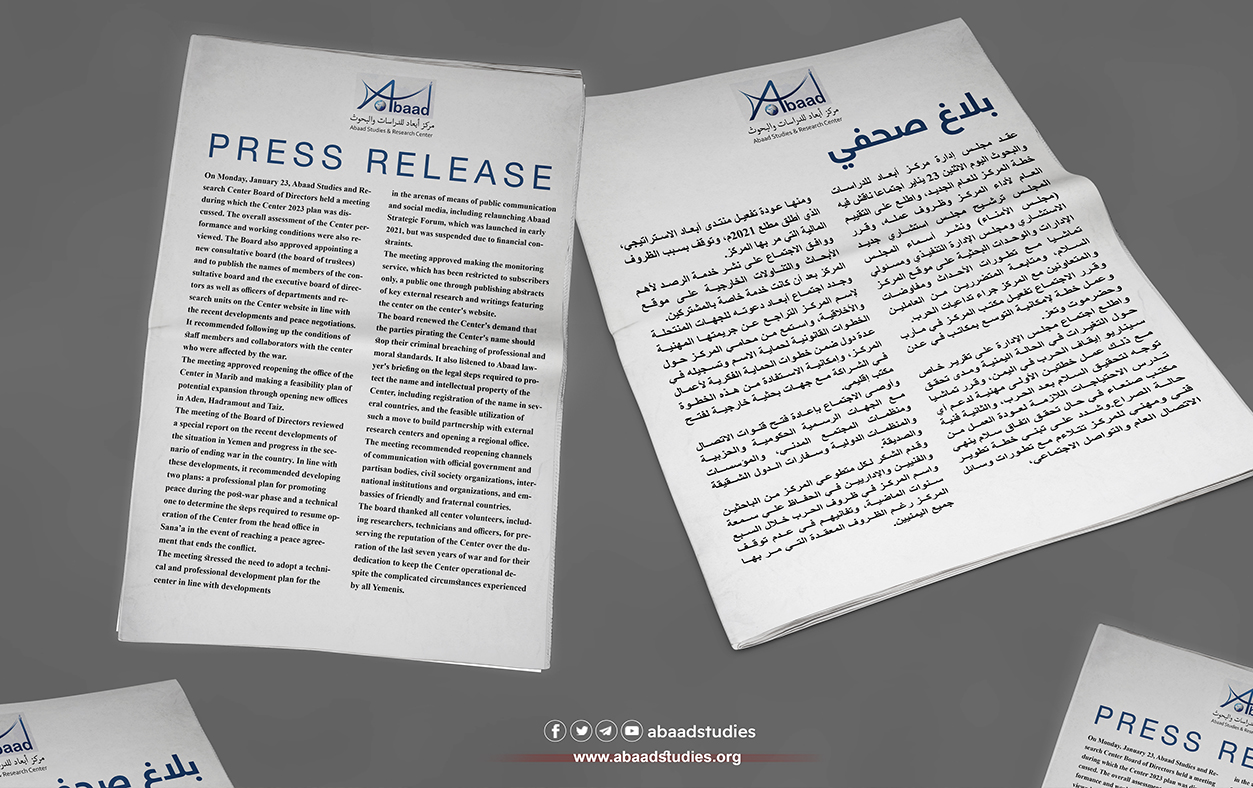 On Monday, January 23, Abaad Studies and Research Center Board of Directors held a meeting during which the Center 2023 plan was discussed. The overall assessment of the Center performance and working conditions were also reviewed. The Board also approved appointing a new consultative board (the board of trustees) and to publish the names of members of the consultative board and the executive board of directors as well as officers of departments and research units on the Center website in line with the recent developments and peace negotiations. It recommended following up the conditions of staff members and collaborators with the center who were affected by the war.

The meeting approved reopening the office of the Center in Marib and making a feasibility plan of potential expansion through opening new offices in Aden, Hadramout and Taiz.

The meeting of the Board of Directors reviewed a special report on the recent developments of the situation in Yemen and progress in the scenario of ending war in the country. In line with these developments, it recommended developing two plans: a professional plan for promoting peace during the post-war phase and a technical one to determine the steps required to resume operation of the Center from the head office in Sana’a in the event of reaching a peace agreement that ends the conflict.

The meeting stressed the need to adopt a technical and professional development plan for the center in line with developments in the arenas of means of public communication and social media, including relaunching Abaad Strategic Forum, which was launched in early 2021, but was suspended due to financial constraints.

The meeting approved making the monitoring service, which has been restricted to subscribers only, a public one through publishing abstracts of key external research and writings featuring the center on the center's website.

The board renewed the Center's demand that the parties pirating the Center's name should stop their criminal breaching of professional and moral standards. It also listened to Abaad lawyer's briefing on the legal steps required to protect the name and intellectual property of the Center, including registration of the name in several countries, and the feasible utilization of such a move to build partnership with external research centers and opening a regional office.

The board thanked all center volunteers, including researchers, technicians and officers, for preserving the reputation of the Center over the duration of the last seven years of war and for their dedication to keep the Center operational despite the complicated circumstances experienced by all Yemenis.